Albedo changes in the Arctic

How global warming and feedbacks are causing huge albedo changes in the Arctic.

Decline of the snow cover on land in the northern hemisphere is accelerating, as illustrated by the image on the right. (1)

Fresh snow can have an albedo as high as 0.85, meaning that up to 85% of the sunlight falling on snow can get reflected back into space. As the snow melts, its structure changes making it less reflective, i.e. its albedo will go down, to as low as 40%. (2)

Changes in vegetation can further accelerate this process. Russia's boreal forest - the largest continuous expanse of forest in the world - has seen a transformation in recent years from larch to conifer trees. Larch trees drop their needles in the fall, allowing the vast, snow-covered ground in winter to reflect sunlight and heat back into space and helping to keep temperatures in the region very cold. But conifers such as spruce and fir retain their needles, which absorb sunlight and increase the forest's ground-level heat retention. (3)

A conversion from larch to evergreen stands in low-diversity regions of southern Siberia would generate a local positive radiative forcing of 5.1±2.6 W m−2. This radiative heating would reinforce the warming projected to occur in the area under climate change. (4)

Tundra in the Arctic used to be covered by a white blanket of snow most of the year. However, as the landscape is warming up, more trees and shrubs appear. Scientists who studied part of the Eurasian Arctic, found that willow and alder shrubs, once stunted by harsh weather, have been growing upward to the height of trees in recent decades. They now rise above the snowfall, presenting a dark, light-absorbing surface. This increased absorption of the Sun's radiation, combined with microclimates created by forested areas, adds to global warming, making an already-warming climate warm even more rapidly. (5 & 6)

Furthermore, encroachment of trees onto Arctic tundra caused by the warming may cause large release of carbon to the atmosphere, concludes a recent study. This is because tundra soil contains a lot of stored organic matter, due to slow decomposition, but the trees stimulate the decomposition of this material. (7) 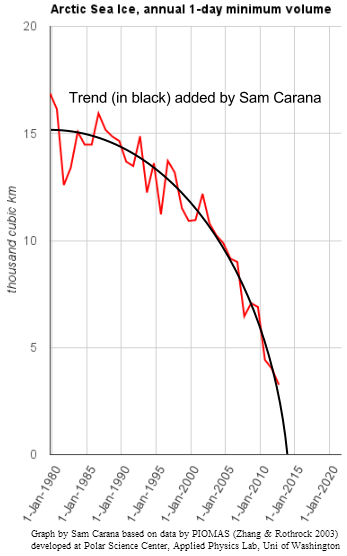 In the Arctic, sea ice volume has fallen dramatically over the years, as illustrated by the image on the right. The trend points at 2014 as the year when Arctic sea ice will first reach zero volume for some time during that year. (8)

Decline of the Arctic sea ice is accelerating, due to numerous feedbacks. As the Arctic atmosphere warms up, any snow cover on top of the ice will melt away ever quickly, decreasing the surface albedo and thus reinforcing the warm-up. As melt ponds appear on top of the ice, the albedo will drop even further.

The image below shows the three areas where albedo change will be felt most in the Arctic, i.e. sea ice loss, decline of albedo in Greenland and more early and extensive retreat of snow and ice cover in other areas in the Arctic. (8)

7. Expansion of forests in the European Arctic could result in the release of carbon dioxide, University of Exeter news, June 18, 2012
http://www.exeter.ac.uk/news/featurednews/title_214902_en.html

- Albedo change in the Arctic
arctic-news.blogspot.com/2012/07/albedo-change-in-arctic.html

- Albedo change in the Arctic threatens to cause runaway global warming
arctic-news.blogspot.com/2012/10/albedo-change-in-the-arctic-threatens-to-cause-runaway-global-warming.html
Posted by Sam Carana at 3:36 PM